I have ascended San Jacinto Peak daily this month, by as many diverse routes as possible. This has included almost all the PCT above 8000′ in the region, Marion Mountain, Seven Pines, and Willow Creek trails, Round Valley, plus Tahquitz Peak and the Tahquitz area meadows. Today’s ascent surpassed my record set last September for consecutive days summiting San Jacinto Peak (currently at 13). I recorded a short vlog at the Peak this morning, available here on YouTube. Key pieces of news are as follows.

The snow has virtually gone. It is now almost possible to ascend the Peak by several different routes without putting a foot on snow. The couple of persistent on-trail areas where snow remains – mainly Little Round Valley and East Ridge – are described below. Obviously additional traction (e.g., microspikes) is no longer required in the San Jacinto high country.

The Pacific Crest Trail remains open at the rockslide near Antsell Rock (Mile 172.5), as reported on 10th June. The video report from late May (available here) may be useful for deciding whether to try to scramble around the rockslide.

Dark Canyon Road is closed, apparently due to flood damage (see photos below). This means Dark Canyon campground is also closed, and there is no vehicular access to Seven Pines trailhead (although the road is hikeable of course).

The Boulder Basin and Black Mountain Group campgrounds remain closed until at least late July. They have a revised tentative reopening date of 25th July.

The status of various water sources was updated in a previous report. and there has been no significant change since then. Most creeks and springs are currently flowing at their best rates in nearly a decade, with many additional ephemeral sources also flowing. [UPDATE: just after I took the photo below, the Round Valley pipe had a new spigot added. Thanks to Florian Boyd for this information.]

Hikers should always be prepared for rapidly changing conditions in the high country in summer. Thunderstorms with lightning and precipitation can occur at or near the high peaks even when such storms are not forecast for lower elevations.

Be rattlesnake aware. The San Jacinto form of the Southern Pacific Rattlesnake is the second most dangerous animal in the high country (after human beings). They have a neurotoxic venom, which is considerably more life-threatening than the haemotoxic venom of many lower elevation rattlesnakes. They are now active, especially below 9000′ elevation.

WEATHER Temperatures will remain summer-like for the foreseeable future – it is now summer, after all – but most of the next week will be a few degrees cooler than the past couple of days. No precipitation is in the forecast.

Deer Springs Trail There are only tiny snow patches from about 8800′ to well above the Fuller Ridge Trail turning at about 9700′. Snow remains more continuous (30% cover) through Little Round Valley but it is virtually snow-free from there to just below San Jacinto Peak. The campsites in LRV are now snow-free.

Tahquitz Peak trail from the PCT/ Chinquapin Flat is clear of snow.

Round Valley trail to Wellman Divide has about 10% snow cover in its upper section near the Divide.

Note that as of 5th June, Willow Creek Trail has 27 trees down on the trail between Saddle Junction and Hidden Divide, making it slow going and a little hazardous in places. The relevant agencies have been notified.

I surveyed Seven Pines Trail on behalf of the State Park today, and it has 35 trees down, almost all above 7500′ elevation. This trail has been very lightly traveled for many months, and is indistinct in places. Hikers without considerable prior experience of this trail should take great care with routefinding.

South Ridge Road is clear and has been graded, but may require 4WD very near the top due to mud.

Black Mountain Road is easily passable through to at least Fuller Ridge campground.

A reminder that the Caramba Trail from near Reeds Meadow through Laws Camp to Caramba is not maintained. When USFS reopened the trail in November 2018 they made it clear that it would not be maintained for the foreseeable future (and it had been closed since the Mountain Fire in July 2013). The trail is indistinct in places, and hikers without considerable prior experience of this trail should exercise very cautious navigation. 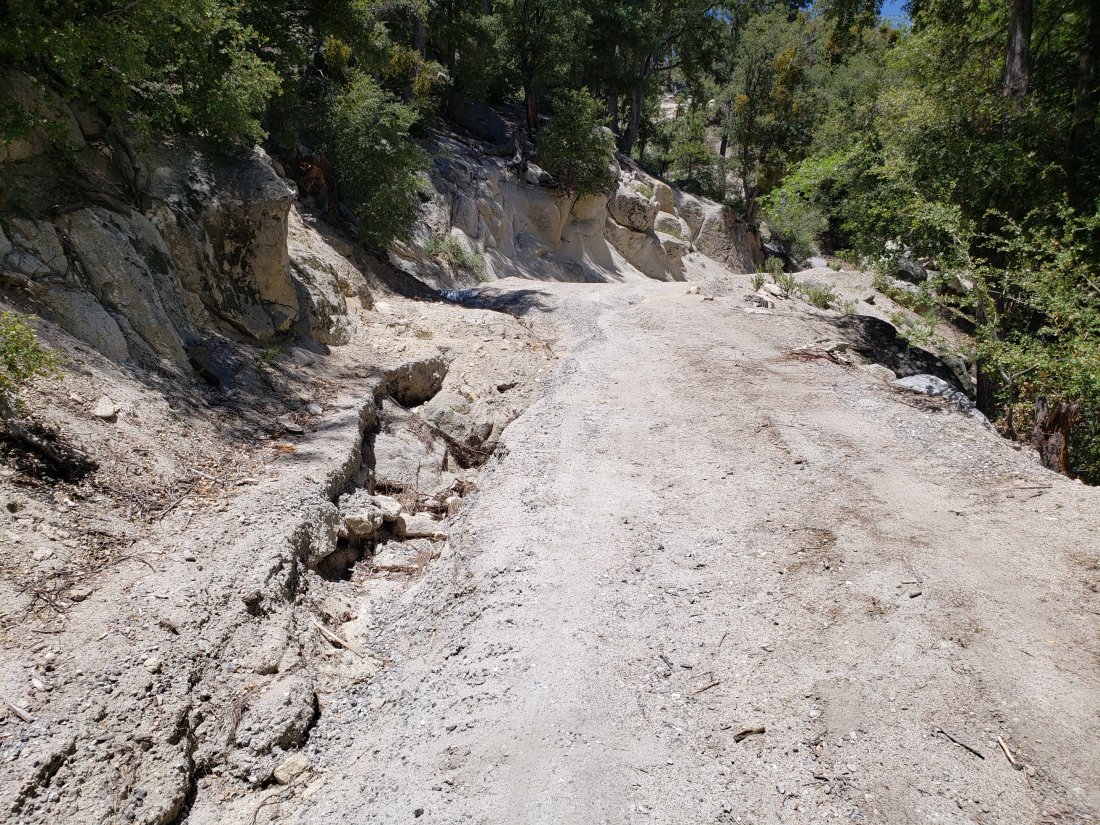