Today I hiked to and from San Jacinto Peak via Fuller Ridge Trail and upper Deer Springs Trail. Other trails hiked in the last few days include San Jacinto Peak from Humber Park and Tahquitz Peak via South Ridge, plus a run to and around the Tahquitz area meadows yesterday.

I recorded a vlog at about 1100 this morning at San Jacinto Peak, available here on YouTube.

Snow conditions underfoot were frankly pretty ugly today. Even before sunrise, snow on Fuller Ridge was not icy hard, and by the afternoon descent it was downright soft and sloppy. Even “waterproof” boots with gaiters struggled to stay dry. Melting has been very rapid in the past week – with overall coverage more reminiscent of late May than late April – and bare patches are present and expanding at all elevations.

Microspikes in combination with hiking poles continue to be recommended throughout the high country above about 8700′ (and lower in some areas e.g., north end of Fuller Ridge). Microspikes are sufficient traction to hike the PCT throughout the San Jacinto mountains.

WEATHER Temperatures at all elevations will be above average for the next three days, with very rapid snow melt continuing. There is cooler weather forecast for early next week, with a chance of light precipitation on Monday 29th April. The first few days of May are forecast to have pleasant seasonal temperatures with no precipitation.

Many trails above about 8800′ remain largely or partly snow-covered, although this is changing rapidly. Details for specific routes are below. Despite warmer weather overall, hikers should be prepared for temperatures at or below freezing in the high country (and colder when considering windchill effects), especially next week.

Major trails are now well traveled, and have obvious tracks. Routefinding is challenging in places for those not familiar with the area due to wandering, inaccurate tracks which often do not match the established trail routes, so use caution.

Fuller Ridge Trail (approx. PCT Miles 185.5-190.5) is best traversed carrying microspikes used in conjunction with hiking poles. Snow patches are frequent enough to use microspikes for about half the five mile length of the Fuller Ridge Trail, specifically Miles 185.5-186, 187.2-187.7, and 188.5-190.4. Particularly on the northernmost two miles, the track does not follow the trail in many places, and there are a couple of steep challenging descents where hikers have clearly fallen. Please use caution. PCT hikers not comfortable with angled snow/ice travel should continue to consider the Black Mountain Road alternative. Fuller Ridge campground is clear of snow.

San Jacinto Peak trails On the eastern side, the Wellman Trail from Annie’s Junction (PCT turning at Mile 181.6) to Wellman Divide (9700′) is largely clear of snow, but microspikes are useful on those areas where stubborn icy snow patches remain. The Peak Trail from Wellman Divide to the Peak remains completely snow-covered and microspikes are recommended. There are multiple meandering tracks, most of which do not closely follow the trail route, so some caution with navigation is required. On the western side, the upper Deer Springs Trail from Little Round Valley to the Peak remains almost completely snow-covered, and note that the consolidated tracks are steep and do not closely follow the trail route. Microspikes are strongly recommended.

Black Mountain Road is clear of snow to the PCT. No microspikes are required to hike to the PCT. Just before the Fuller Ridge campground turning, the road is partly snow-covered at up to 2 feet deep, which continues in patches north of Fuller Ridge down to about 7200′ elevation. For vehicular access, Black Mountain Road has been cleared, repaired, and partially graded to the turning to Boulder Basin, and cleared and repaired to the PCT crossing.

Skyline Trail is clear. C2C hikers have not been encountering snow until past Long Valley Ranger Station.

Devil’s Slide Trail is clear of snow, with a couple of tiny icy patches near Saddle Junction.

Deer Springs Trail is clear of snow to Strawberry Junction (8100′). Snow is limited to small patches for the next mile north, before becoming largely continuous near the Marion Mountain Trail junction. The track above the Fuller Ridge junction up to San Jacinto Peak largely does not approximate to the true trail, and is steep and postholey in places.

Marion Mountain Trail is clear of snow to the viewpoint at 7500′. Above that there is only limited patchy snow at about 10% coverage all the way to the PCT at 8700′ elevation. Microspikes are not required for the ascent, but some hikers may find them useful for descending the uppermost 0.5 mile.

Tahquitz Peak trail from Chinquapin Flat [UPDATED Saturday 27th April] There are reasonable steps to follow through the snow. Microspikes in conjunction with hiking poles (or ideally an ice axe if you know how to use it) are strongly recommended for this perilous trail until it is completely clear of snow.

SNOW DEPTHS measured today (and on earlier dates as indicated) are as follows. Current average depth is given; drifts can be much deeper than the average in places. Altitudes are approximate. 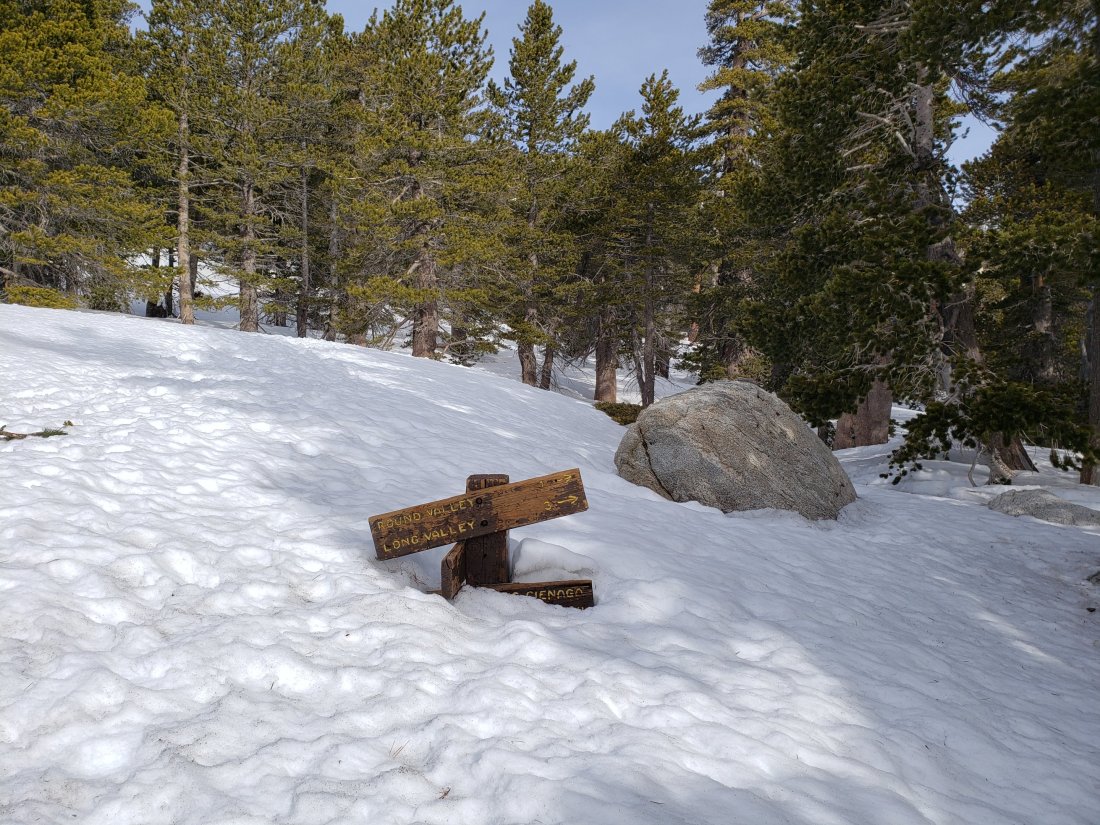