[Weather update: the likelihood of an historically large storm this week (27th-29th November) is fading. However the storm will still be dramatic for November, with 10+ inches of snow forecast for 6000′ elevation (e.g. Fern Valley and Pine Cove) and about two feet of snow above 10,000′ elevation. It will be unseasonably cold everywhere. Heavy rainfall is possible at mid-elevations at least. Please be prepared and very cautious.]

[Technical note: although it seems counterintuitive, I have found that I am often able to upload videos more easily to YouTube from the high country than upload text updates to this website. Please subscribe to San Jacinto Trail Report on YouTube if you would like to get the latest real time updates from the mountain, in addition to the greater detail here on the website. Thank you.]

Our first snow storm of winter 2019/2020 arrived in some style on Wednesday. Rain starting around midday on Tuesday 19th turned to snow at San Jacinto Peak that afternoon as I hiked up, but did not start settling due to the warm ground until early on Wednesday. Even then, it fell as very fine rounded grain snow initially, struggling to accumulate to more than an inch or so. Eventually the Peak received 10″ of snow, though it is interesting to note that this is not much more than at Saddle Junction, nearly 3000′ lower.

At lower elevations, rain did not turn to snow until about midday Wednesday. Thereafter, it snowed intermittently all afternoon, in large, wet snowflakes that accumulated rapidly. For the whole system in a 24 hour period, Idyllwild (at 5550′) received 0.86″ rain followed by 4.0″ snow.

I recorded a short video at about 0730 Wednesday morning at San Jacinto Peak, which give a flavour for the conditions at that time, available here on YouTube.

Thursday morning we hiked Devil’s Slide Trail to Saddle Junction to assess snow depths at about 6500′ and 8100′. In that two hour period, the snow depth at Humber Park reduced by almost half due to rapid melting (and the sun has barely even emerged from the cloud yet).

This morning we hiked from home to Tahquitz Peak via South Ridge Trail to assess snow conditions on a (largely) sun-exposed route.

Microspikes are potentially useful at all elevations above about 7000′. In fresh powder they are not currently required, but with freeze-thaw cycles the trails will become increasingly icy and compacted. With anticipated rapid melting, the elevation at which spikes are useful may rise quickly. Snow depths were marginal for snowshoeing above about 8000′ elevation today, but will likely be unsuitable by the weekend.

Waterproof footwear is recommended on approach trails at least (e.g., Devil’s Slide, lower Deer Springs) due to slushy melting snow, especially after early morning. It will also be invaluable for at least the next few days elsewhere in soft melting snow.

Despite dramatic temperature fluctuations between storm systems, hikers should nevertheless be prepared for temperatures near or below freezing in the high country, and potentially well below freezing when considering windchill effects.

The warmth of the ground before the snow fell will speed the rapid melting during the warming trend expected in the next few days. Conditions may therefore change quickly. Depending on when the Trail Report is updated, it is possible to find less snow this weekend than is described here. 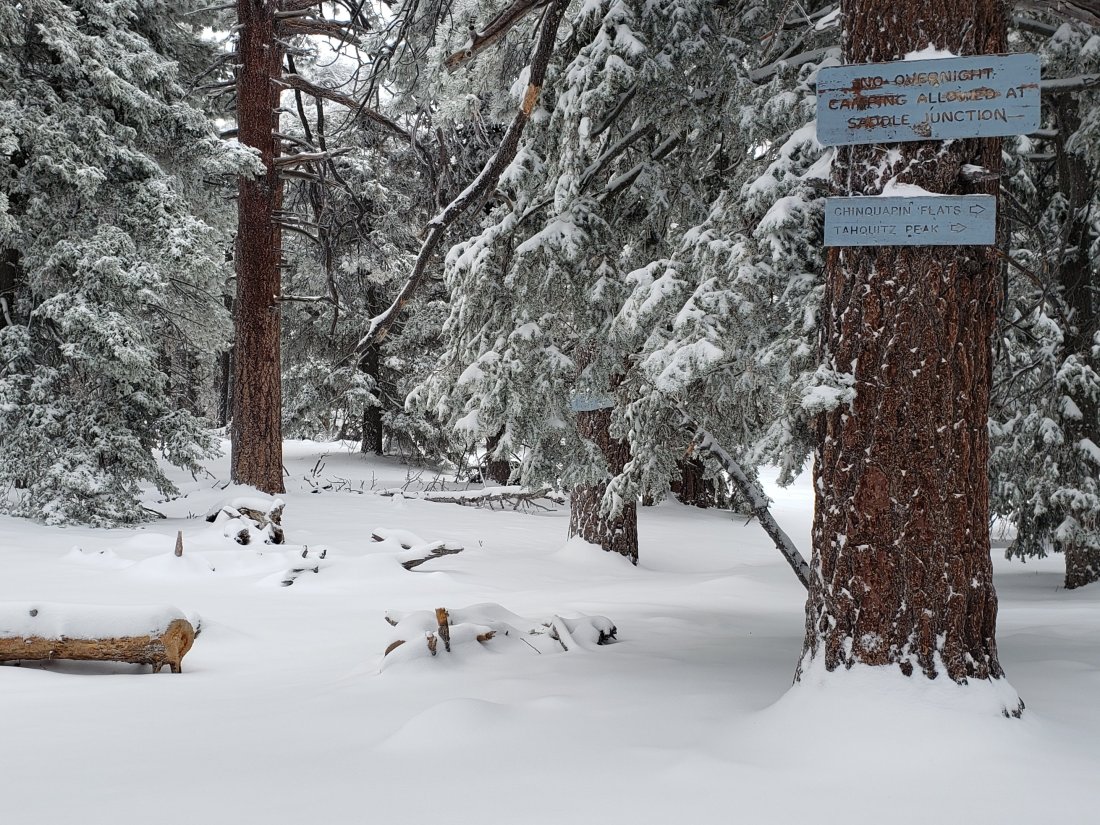 WEATHER As is so often the case these days following a good winter storm, a significant warming trend follows. This will be especially pronounced on 23rd-25th November which will melt much of the new snow at all elevations, especially below about 8000′. However this brief, warm spell will be followed by another storm system, currently forecast to be even more dramatic than this week’s. Precipitation on 27th-29th November may be more than double what we experienced in recent days.

All trails above about 5000′ were completely snow-covered Thursday morning, but by this afternoon melting meant that many areas below 7000′ were already becoming patchy and/or slushy. Those areas may refreeze overnight and be more challenging underfoot in subsequent days (microspikes recommended).

All trails above 7500′, including much of the PCT in the San Jacinto mountains, are currently under continuous snow cover approximately 2-10″ deep.

Reliable, well-traveled tracks are currently in place for (at least): Devil’s Slide Trail, Tahquitz-area meadows, Tahquitz Peak from the PCT, South Ridge Trail, and from the Tram through to San Jacinto Peak.

SNOW DEPTHS measured on 21st November are as follows. Average depth is given, drifts may be significantly deeper than the average in places. Altitudes are approximate. Many thanks to Kyle Eubanks for data from Long Valley to the Peak.