Today I hiked to San Jacinto Peak from Humber Park via Saddle Junction and Wellman Divide, descending the same way (in order to try to consolidate a reasonable trail). Above Saddle Junction, the only (vague) tracks to be seen anywhere on the mountain were my own from last week’s report. Early in the morning I was able to use microspikes to ascend to Saddle Junction in firm icy snow, but the rest of the hike was in snowshoes. The early afternoon descent below 9000′ felt a bit like wading through soft serve ice cream, as the snow melted in the warm sun.

I recorded the following vlog just after 1145 at San Jacinto Peak this morning. (After I recorded this video the Tram gave an updated reopening date of 1st April.)

The only additional snowfall has been 3-5″ in the afternoon just after my last trail report on 21st. However it was obvious from the state of the trees that the upper mountain (>9000′) was above that precipitation. Strong winds at higher elevations have smoothed the existing snow so there is little or no evidence of the trail system. Considerable caution is required with both route-finding and traversing slopes.

Snow depths measured today are as follows. Only average depth is given, due to the complexity of past storms. Strong winds have led to major drifting; drifts can be much greater than the average depth in places. Altitudes are approximate.

Access closures The Valentine’s Day floods continue to make access to the San Jacinto mountains challenging. Palm Springs Aerial Tramway remains closed until about 1st April. Check their website for updates. Highway 243 between Banning and Idyllwild is closed from north of Bay Tree Spring to just north of Alandale until at least April. Highway 74 between Mountain Center and Valle Vista (Hemet) is closed until sometime in March. The status of some of the trailhead access roads was updated in my posting yesterday. Many minor roads around Idyllwild-Pine Cove are also closed or damaged.

WEATHER Temperatures will remain above average through at least the first week of March, with steady melting of snow at all elevations, especially on sun-exposed slopes (which at this time of year is almost everything except the north faces). Light precipitation is forecast as a possibility for Saturday 2nd March, with very light rain to at least 8000′, and a dusting of snow (maybe an inch) above that.

All trails above about 4000′ remain snow-covered at this time, despite rapid melting in the past couple of days, especially below 7000′. Measured average snow depths are listed above. It continues to be delightful to see so many ephemeral creeks flowing that had had little or no flow for much of the past six years.

Hikers should be prepared for temperatures near freezing in the high country and below freezing above 10,000′, especially when considering windchill effects.

Snowshoes are currently essential on all “trails” above 7000′, especially after mid-morning, and anywhere in the backcountry (and at lower elevations on warm afternoons in soft snow). Microspikes are currently useful only in the early mornings on well consolidated trails (e.g. Devil’s Slide, lower Deer Springs). Crampons (with an ice axe) may become increasingly useful at the highest elevations if the snow consolidates with freeze-thaw cycles, at least in the mornings.

Routefinding will be very challenging for those not familiar with the area. Almost all signage above about 8500′ is completely snow-covered. Most PCT marker posts at lower elevations are also completely obscured. Very few trails have been broken whatsoever, and even my snowshoe tracks from early this morning were becoming vague by my descent a few hours later due to melting of surface snow.

Tahquitz Peak trail from Chinquapin Flat will be extremely treacherous. Crampons in conjunction with an ice axe, and knowledge of how to use both, are essential. 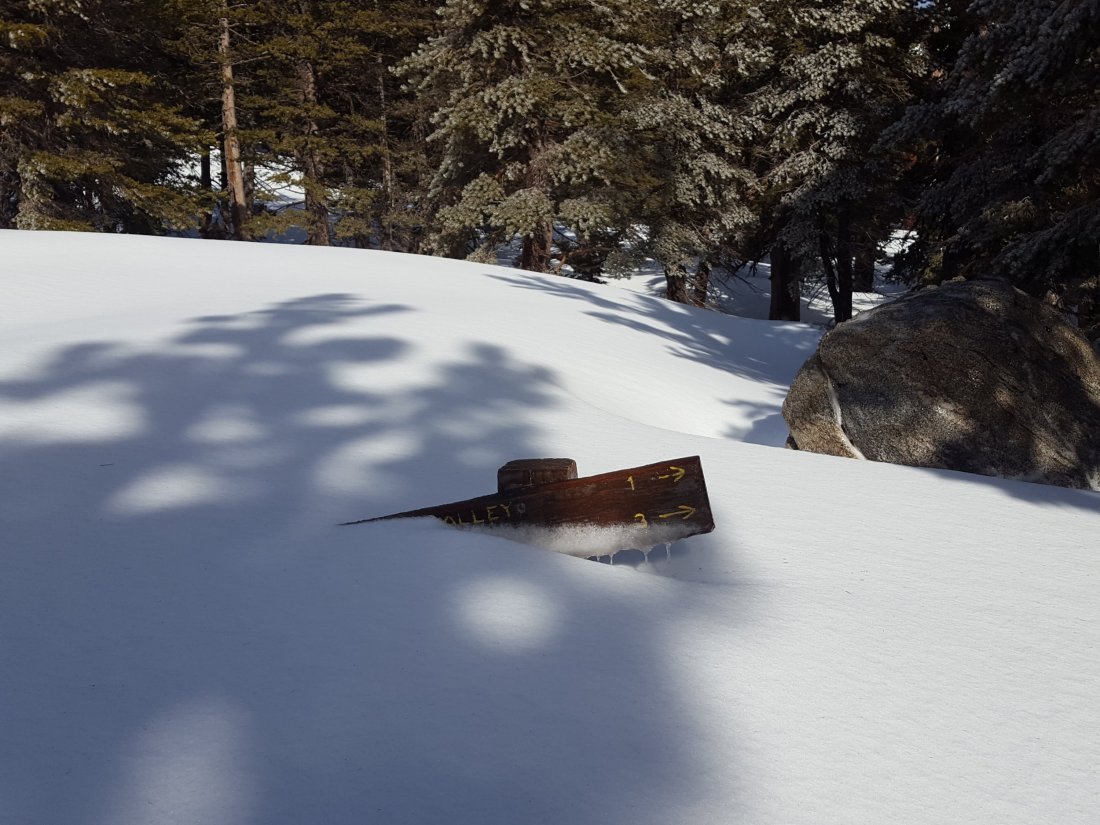