[UPDATE 24th December: starting tonight until at least the end of the month, very cold conditions should be expected across the high country (>8000′). At the high peaks, air temperatures will be well below freezing, with windchill temperatures about 20-50 degrees below freezing.]

[UPDATE 23rd December: during the federal government shutdown, the U.S. Forest Service Idyllwild Ranger Station is closed. Adventure passes and wilderness permits are not required (or at least unenforceable) until the shutdown ends.]

Happy Winter Solstice! Always a good day for hikers, knowing that we have six months of increasing day length to look forward to. Our hike to San Jacinto Peak this morning ascended from Humber Park via Wellman Divide and back. On Wednesday I spent a long day hiking Blaisdell Ridge and far up Falls Creek on the north face of San Jacinto for SAR work, which allowed me to assess the snow status on that aspect of the mountain.

All high elevation trails (>8500′) remain snow-covered. With unseasonal warm weather since Monday, rapid melting has continued, with many more inches of snow depth lost at all elevations in the past few days.

Microspikes are useful, but not essential, on most trails above about 8000′ at this time (see details below). They are usually most valuable in the early morning when snow is less soft, and for descending. Snowshoes are currently useful only for extensive travel off-trail.

Starting on Monday 24th, hikers should be prepared for temperatures at or near freezing in the high country (>8000′ elevation), and below freezing at the highest elevations (well below freezing when considering windchill effects).

Weather Thankfully, the previous two weeks of very mild weather will come to an abrupt end next week, and temperatures may even be below average for the remainder of December. Current forecasts suggest the possibility of precipitation for the morning of 25th December, including light snow in the high country, which would be a great Christmas gift for the mountain.

Tahquitz Peak trail from Chinquapin Flat has an average depth of about 6-10″ of snow, however some drifted sections remain about 20″ deep. There is a reasonable trail from earlier foot traffic, however the snow is becoming icy, especially in the early mornings. Microspikes (with hiking poles or ice axe) are strongly recommended, especially for descending. [I would discourage carrying an ice axe if you aren’t familiar with how to use it.]

South Ridge Trail is clear of snow from the top of South Ridge Road to Old Lookout Flat (the plateau at 7800′). From 7800′ to Tahquitz Peak the trail is largely snow-covered in patches, with 2-4″ near Tahquitz Peak. There are some deeper drifts on the uppermost switchbacks. Depending on the firmness of the snow, microspikes are not necessary for ascending, but they are useful for descending the uppermost switchbacks.

Eastern slope trails All the main trails have been well traveled and are well consolidated. This includes all the Long Valley and Round Valley trails, and the East Ridge Trail on San Jacinto Peak.

Western slope trails These have still been less traveled than the east side, and as such require more care, but nevertheless largely have clear, firm tracks to follow (with some exceptions discussed below). Snow melt has been a little less dramatic on the western side, which isn’t exposed to the morning sun and is much more heavily forested, especially above about 9000′.

Deer Springs Trail The track between Little Round Valley and San Jacinto Peak is now more obvious (but steep) and microspikes are sufficient (and recommended).

Deer Springs Trail is completely clear of snow below 8200′, and microspikes are not required below 8600′.

Marion Mountain Trail has been heavily traveled, and the trail is largely clear of ice and snow below about 7800′.

Fuller Ridge Trail and Seven Pines Trail show no signs of use since the storm earlier this month, so route finding will be very challenging for those not fully familiar with these trails.

Devil’s Slide Trail is clear of snow below 7800′. Hikers comfortable with moderate snow travel will find microspikes are not required to Saddle Junction.

Pacific Crest Trail north from Saddle Junction is largely clear of snow to about 8800′, and then again from near Annie’s Junction to Strawberry Juntion. 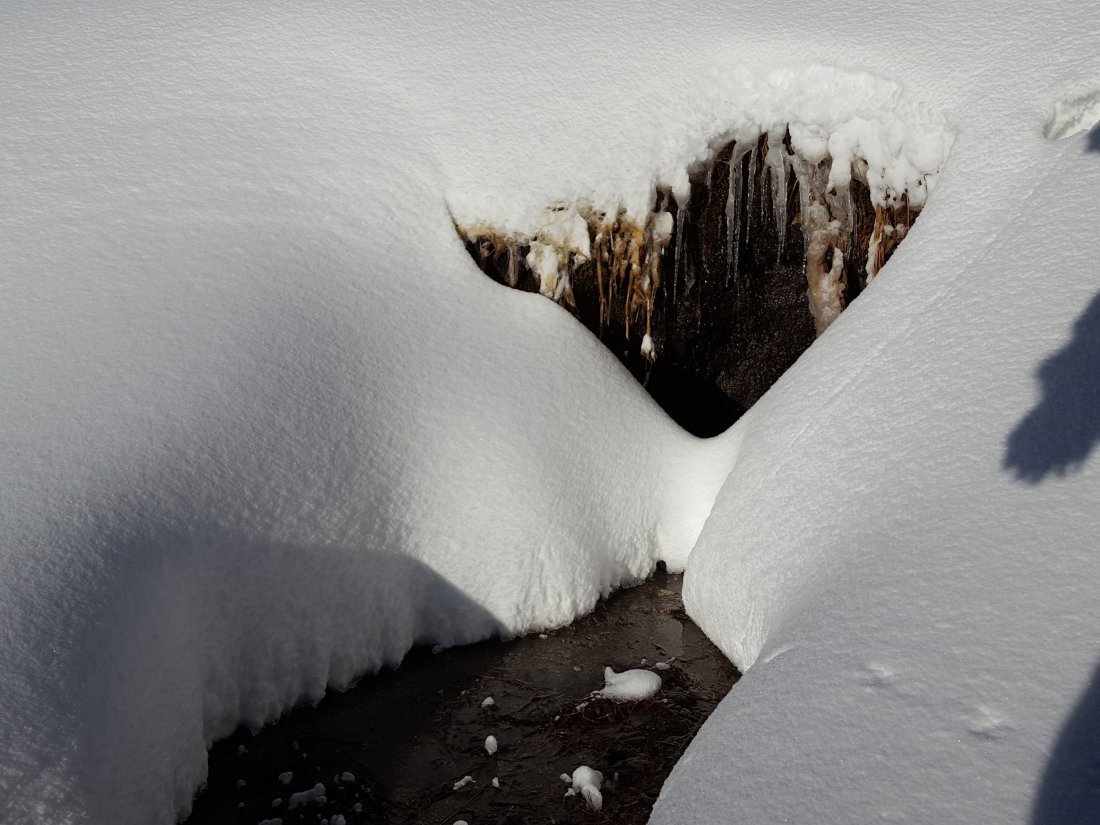