The sixth storm of this winter came rapidly after the fifth (described here), with significant snowfall more-or-less continuously from the afternoon of 25th December until early afternoon on 26th. At San Jacinto Peak, an additional inch of snow fell in the early hours of 27th.

Ultimately snow quantities were below forecasts, especially in the high country. It was a cold system, with single digit (Fahrenheit) air temperatures in the high country. Although the snow level dropped below 4000′, depths at low elevations did not rival the Thanksgiving snowstorm of last month.

A short video describing the conditions from San Jacinto Peak at sunset on 26th December is available on YouTube.

Snow depths measured on 27th are listed at the foot of this posting. With the exception of trails mentioned below, currently many major trails have not been traveled and are obscured by heavy snowfall. A wild SE gale on the night of 25th resulted in very extensive drifting of snow, especially above 9000′ elevation. Cautious navigation is strongly recommended everywhere.

Snow depths are currently ideal for snowshoeing almost everywhere above about 6000′ elevation. Microspikes will become increasingly useful at lower and mid-elevations over the next two days as established trails become consolidated by hiker traffic and undergo freeze-thaw cycles. They are especially useful for descending trails when they become icy and compacted.

Note that the USFS gate at Humber Park is closed. There are nine legal parking spaces – available for all uses – just below the gate (near the upper Ernie Maxwell trailhead). The next closest legal parking is 0.1 mile downhill on Forest Drive.

WEATHER The seventh winter storm of 2019/20 is forecast for Monday 30th December. It will again be a cold system with a low (4000′) snow level, but little (or no?) snowfall in the San Jacinto mountains.

Looking into 2020 it may warm fairly rapidly in the first week of the New Year, with considerable snowmelt at all elevations. Medium term forecasts currently show no storm activity for the first half of January.

All trails above about 4500′ are covered with between 2″ and 40+” of snow, depending on elevation. This includes the Pacific Crest Trail from south of Mile 151 (the Hwy 74 crossing) to about Mile 197.

Reliable tracks are currently in place only for Devil’s Slide Trail, from Saddle Junction to San Jacinto Peak, and from the Tram through to Wellman Divide. While this situation will likely change over the coming weekend, be advised that the storm on Monday 29th may again obliterate some tracks (at least above 8000′).

SNOW DEPTHS measured today are as follows. Average depth is given. With strong winds during this storm, drifts are significantly deeper than the average in places. Altitudes are approximate. 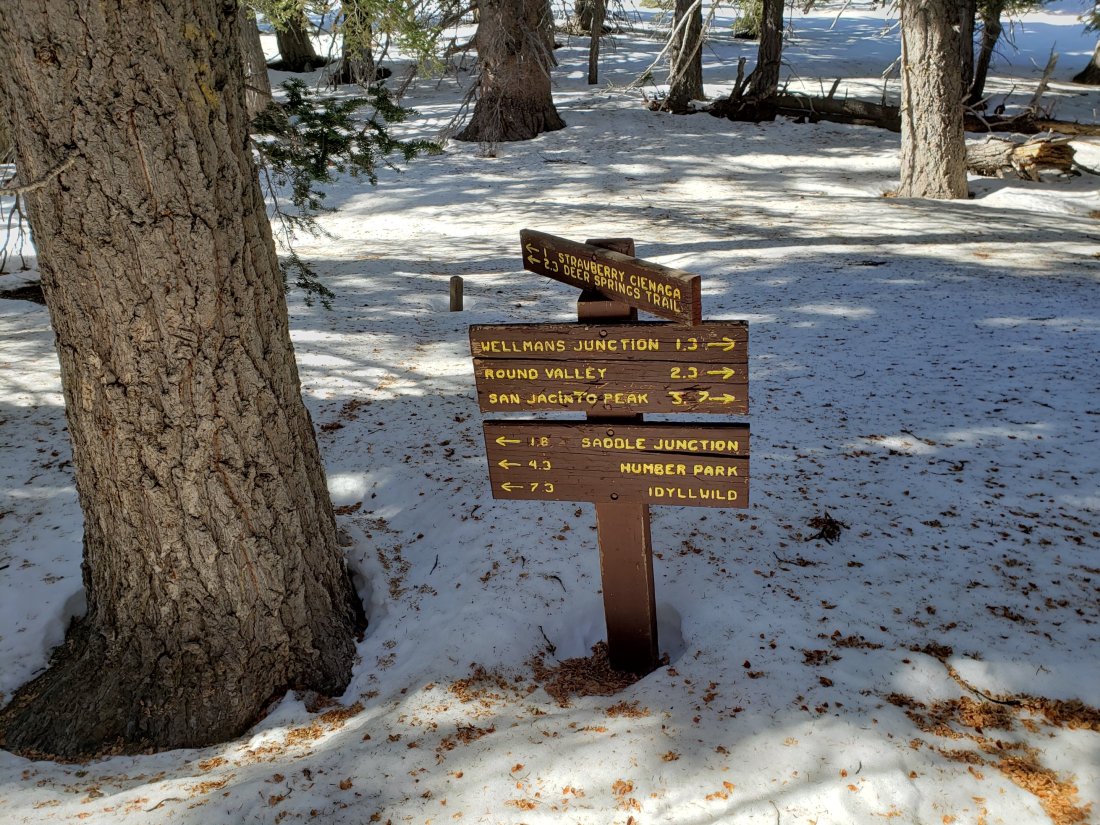