This morning I hiked to San Jacinto Peak up the eastern side from Devil’s Slide Trail via Wellman Divide, descending the western side down Deer Springs Trail. The past week has included hikes on half-a-dozen local parts of the PCT, plus Spitler Peak Trail, Cedar Springs Trail, Tahquitz Peak and the Tahquitz area meadows.

Detailed trail conditions are discussed below, and measured snow depths and current access problems are described near the foot of this posting. Access to Black Mountain Road from Idyllwild became possible this afternoon due to a short section of Highway 243 reopening.

I have also added the status of various water sources, mainly for the benefit of thru-hikers. Some sources in the high country are still inaccessible under snow, while I have noticed some minor ephemeral streams are already drying up. Of course snow is available for melting in the high country also.

The most challenging PCT hiking problem continues to be around Apache Peak. I talked to many thru-hikers on Sunday about their experiences in this area, and I plan to check it again tomorrow.

I recorded the following vlog this morning at San Jacinto Peak.

In the blog I describe fairly good snow conditions for my ascent this morning. The descent was softer with more postholing, especially through Little Round Valley. Overall snow conditions are more reminiscent of mid May than early April. Temperatures above seasonal have resulted in substantial snow melt at all elevations. Melting has also made snow conditions more uniform (and hence easier underfoot when cold and hard) and consolidated trails are good for fairly easy hiking. However, soft snow from mid morning onwards can result in some postholing and sliding later in the day.

Microspikes, in combination with hiking poles or, in some situations, an ice axe (if you know how to use it) are recommended throughout the high country. Microspikes are sufficient to hike all of the PCT in the San Jacinto mountains at present. Crampons (always with an ice axe) may be useful for those hikers who are less confident on angled snow and ice. Snowshoes continue to have some use for off-trail travel only, in flatter terrain, and especially in softer afternoon snow. I saw tracks of folks hiking the Peak and PCT without spikes, but also much evidence of them slipping and sliding.

WEATHER Temperatures will be below seasonal for the next few days, resulting in excellent snow hiking conditions, then above average thereafter, with extensive snow melt resuming at all elevations.

Weather at the Peak on 1st April 2019 was almost identical to today. At 0930 the air temperature was 49°F (9°C), with a windchill temperature of 48°F (9°C), 17% relative humidity, and largely calm conditions with an occasional West breeze to 2 mph.

Most trails above about 8200′ remain largely snow-covered. Trail conditions will continue to change rapidly with more melting. Details for specific routes are below. Despite warmer weather overall, hikers should be prepared for temperatures below freezing in the high country (>8,000’/2300m elevation) over the next few days, and even colder when considering windchill effects.

Waterproof footwear is useful on approach trails (e.g., Devil’s Slide, lower Deer Springs) due to multiple stream crossings and considerable water flowing in the trails. It is also invaluable in the soft melting snow in many areas, especially after mid-morning.

Many major trails have been well traveled in the past week, so they have obvious, well consolidated tracks. Routefinding is challenging in places for those not familiar with the area due to wandering, inaccurate tracks however, so use caution. Some signage above about 8500′ remains snow-covered, including many PCT marker posts.

Pacific Crest Trail The trail is clear of snow from Highway 74 (Mile 151) to about Mile 173, except for the challenging section at Mile 169.5. Between about Mile 173 and Mile 191, the trail averages 90% snow-covered, but with more snow-free areas opening up every day. Miles 182 to 184 are now largely free of snow.

Fuller Ridge Trail should not be attempted without microspikes, ideally with an ice axe (if you know how to use one), or at least hiking poles. Significant sections remain challenging. PCT hikers not familiar with angled snow/ice travel should consider the Black Mountain Road alternative to Fuller Ridge, at least for the next few days.

Skyline Trail is clear of snow to 7200′. Microspikes and hiking poles are sufficient above that elevation, although an ice axe (if you know how to use it) could be useful on the traverse chutes. There is an obvious track to follow through the snow-covered section. [Thanks to Chris Dow and others for this update.]

Devil’s Slide Trail is largely clear of snow, with a few icy snow patches near Saddle Junction. Some hikers will find microspikes useful, especially for descending.

Deer Springs Trail is clear of snow to Strawberry Junction (8100′), except for a few tiny patches near the Junction. Snow is limited to patches for the next mile north, before becoming continuous near the Marion Mountain Trail junction. The track above the Fuller Ridge junction up to San Jacinto Peak does not approximate to the true trail, and is steep and postholey in places.

Marion Mountain Trail has been hiked and has a reasonable track to follow. Snow is patchy above about 7500′ and is nearly continuous above about 8200′.

Tahquitz Peak trail from Chinquapin Flat remains very treacherous. Last week I made the first traverse of this trail for several weeks. Crampons in conjunction with an ice axe are very strongly recommended for this section. It is possible to pass between the PCT and Tahquitz Peak along the top of Tahquitz Ridge with caution.

South Ridge Road is clear of snow, but is impassable near the top due to severe storm damage. South Ridge Trail is largely clear of snow to Tahquitz Peak. Above Old Lookout Flat (7800′) there is about 30% patchy snow coverage. Microspikes are valuable for descending – and can be useful for ascending – the switchbacks above 8500′, especially when icy in the early morning.

SNOW DEPTHS measured today are as follows. Current total depth is given. Drifts can be much greater than the average depth. Altitudes are approximate.

The Round Valley faucet is not flowing (per Mount San Jacinto State Park).

Both the northern and southern springs at Wellman’s Cienega are flowing well. These are the sources for Willow Creek, which is flowing well where it crosses the Willow Creek Trail.

Tahquitz Creek is flowing well at the northern end of Little Tahquitz Meadow. It is also flowing well further upstream at its source (known locally as Grethe Spring) where it crosses the PCT (approx. PCT Mile 177).

Skunk Cabbage Creek – that flows through Skunk Cabbage Meadow and then crosses the Caramba Trail near Reeds Meadow – is currently flowing well.

The spring in the creek in Little Round Valley is wholly under snow but is close to being snow-free.

Shooting Star Spring (below Little Round Valley but above the North Fork of the San Jacinto River crossing) is currently hidden under snow.

The Deer Springs stream crossing at the PCT (approx. PCT mile 185.6) is wholly snow-covered. [PCT hikers note: almost all PCT guides and apps confuse the Deer Springs crossing with the North Fork of the San Jacinto River. The latter is another 0.5 miles further north on the Fuller Ridge Trail, see above.]

On Devil’s Slide Trail, Jolley, Middle, and Powderbox springs are all flowing strongly, as are several unnamed ephemeral creeks.

On the Ernie Maxwell Trail, the crossing of Chinquapin Creek just below Humber Park continues to flow very well, as do several other creeks that cross the trail.

Highway 74 There is a water cache where the PCT crosses Highway 74, on the south side of the highway. This appears to be reliably maintained, but never assume water caches will definitely be there.

Spitler Peak Trail Descending the trail there are five water crossings. The first two, at 0.9 and 0.95 miles down, cross a tiny side creek which is already drying up and should be ignored. The next crossing, at 1.1 miles down, is Spitler Creek and is the best source of water (currently flowing well). The next two crossings are the same creek, but for obvious reasons it is best to fill up at the highest of the three crossings.

Antsell Rock Creek (N 33 41 52, W 116 39 08) Right by the Spitler Peak Trail trailhead on Apple Canyon Road, Antsell Rock Creek is flowing very well. Just on the upstream side of the road there is excellent access to the creek.

ACCESS CLOSURES The Valentine’s Day flood events continue to make access to the San Jacinto mountains challenging. Highway 243 between Banning and Idyllwild is closed from north of Bay Tree Spring to just north of Lake Fulmor. The remaining closed section may not reopen until July or later. Highway 74 between Mountain Center and Hemet may partially reopen – with a pilot car and restricted hours – by May. Whitewater Preserve (PCT Mile 218.5) recently announced that they will not be able to accommodate day use or overnight PCT hikers this year, due to severe damage to Whitewater Canyons roads and trails. Currently the trail from the PCT to Whitewater is non-existent and requires a wide water crossing with quickly flowing water. 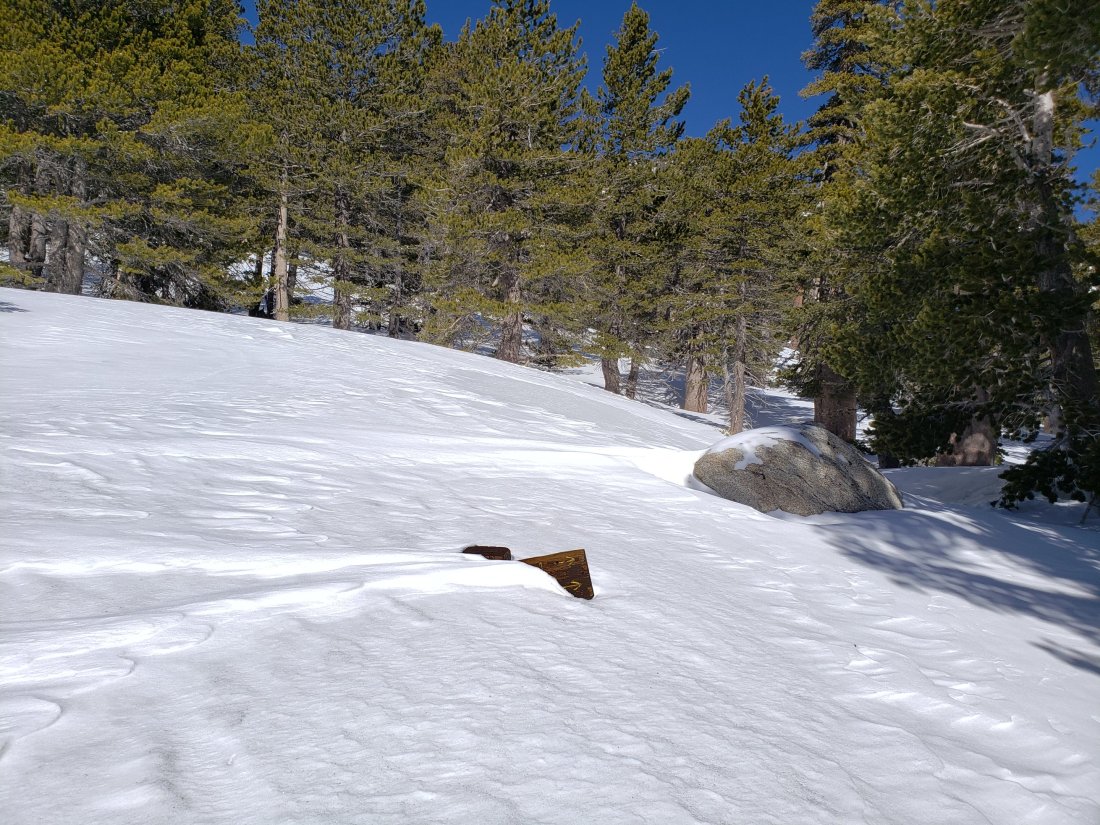